Learn How to Determine Your Target Cost Per Acquisition

You must deconstruct your target CPA, and develop KPIs from there. You will need to know or approximate LTV and distinguish between lead gen and ecomm KPIs.

Okay, if there's one thing I know about marketers, it's that we don't always love math and numbers. We like to be a little bit more creative. That's changing because a lot of what we do is data driven on platforms like Facebook and AdWords but on the whole, if you had a bad experience with math, I got to tell you, you're going to have to get over it a little bit. There's some real basic math and work with numbers that we're going to do so that you have a good handle on your business and so that you know how to scale. Until you have a handle on some of these key figures, you won't really be able to scale and if you do, it's probably you getting lucky and you're not going to have repeatable success. Bare with me here. If you've had some bad experiences in the past, this is going to help you get over it.

Now, what we're trying to accomplish here is understand; what are some of the key targets that you need to hit with your advertising on Facebook in order to then know that it's okay to raise budgets and start to scale up? The principle at play here is that we want to get profitable early on with some room to grow. In other words; we want to have a high enough ROAS or return on ad spend early on, that when we raise our budgets and we start scaling our campaigns, that they have some room to have lower performance.

If we've learned one thing about how Facebook optimizes for different users in that initial diagram that we saw with the concentric centers going out, it's that, when you raise the volume of sales or start reaching a broader group of people, the performance can start to go down. Our goal with scaling any of your campaigns isn't just to maintain a certain cost per acquisition or cost per sale but, to make sure that it stays within a certain range that you're making money. Every time you're spending money, you're making money back.

With that in mind, let me just go to this little spreadsheet here to illustrate a lesson here for you. Let's just imagine, here's a product in one of our stores, it retails for about 100 bucks. Let's say that you're selling for $100 and your product cost is about 40 bucks. Now, this example that I'm going through here is going to relate to an e-commerce situation and you can adopt the same model here if you're in a lead generation business or if you have a service that you're selling. You're going to have your own cost structures but for the sake of simplicity, let's just pretend that we're selling these bed sheets.

They sell for 100 bucks, they cost $40 to produce. That's the cost from the supplier. It's going to leave us with a gross profit of 60 bucks. Not bad. We sell it for a hundred, it costs us 40 bucks, we make 60 bucks. It's a 60% margin. Not bad. Just to put this in the plainest of terms, that means, if we want to just break even, we don't want to lose money, we don't want to make money, we have to acquire that customer for 60 bucks because that $60 cost of acquisition would wipe out the profit and we'd be left with zero.

Now, the goal here, obviously, isn't to break even but you got to know what that initial break even point is so that you're not losing money. One common mistake that we see among advertisers is that Facebook will reveal to you return on ad spend. They'll show you this ratio or this percentage that's basically telling you, "Hey, every time you spend a dollar, you get these many dollars back." The mistake that we see people make is that, they see something that's over one, that's over the ratio of one and they think they're making money but they're not accounting for their product costs, they're not accounting for their product margins. You can see in this case, your break even return on ad spend has to be at least 1.67 or 167%. That's where you're not making money, you're not losing money. 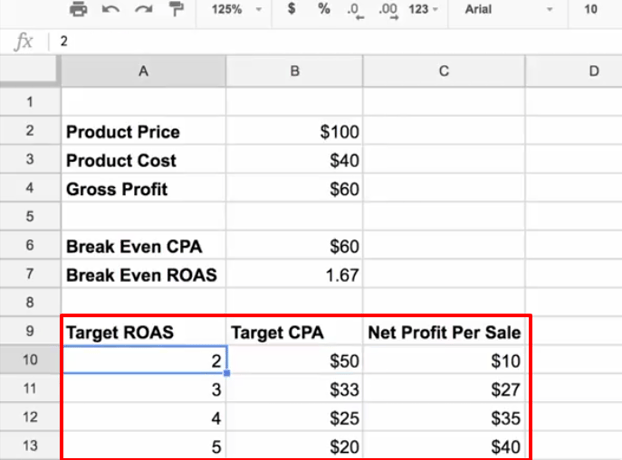 You can see to get a target return ad spend of two, you need to acquire people for no more than $50 and that's going to leave you with net profit per sale. Now great, you're making $10 of real money, not just revenue, with actual profit in your pocket. You made 10 bucks. Not bad.

Will that scale? The answer is no. When we see these target return ad spends of about two or less, we're saying, listen, that's a great start but it's not likely going to scale with the cost model that you have in place or how much it costs to produce these products. Now, when we look at three, four and five, you can see that the price that you're actually able to pay to acquire a customer goes down, down to $20 here but your profit goes up. This isn't rocket science guys. I promised you that this was going to be easy math. Now, here's the million dollar question, literally, the million dollar question or more; what target ROAS do you need in order to scale a campaign effectively?

This answer's going to be different for you guys, depending on again, your cost structure. This is why we're trying to illustrate here, this isn't a one size fits all approach but in general, when we see a ROAS between three and four, it gives us a lot more space to scale up. That means, as we raise our budgets and we're going to be reaching more people and it's going to cost more to reach those people, we know that we can afford to do it when we're sitting in here. Now, this, I should remind you, is not for one ad. It can be for your entire funnel. We're going to go into funnels a little bit later. If we're talking about maybe there's an ad for a cold audience and then we'll be retargeting people, maybe your ad reaching the cold audience is only getting like a one or a two X return on ad spend but, you're retargeting ad is getting people at an 11 or a 15 return on ad spend. We're really talking about the blended average of all of your campaigns running. It should really be between a three and a four in order to have enough room to scale.

There's always exceptions to the rule but we're trying to give you guys some real actionable things to work against here to scale your campaigns. Now, you also have to factor in different parts of your business here. I don't want to get too complicated. The idea here is to give you a nice starting point and then you can get as complicated as you'd like. There are other concepts here that are good to at least mention right now, which, one of them being your customer's lifetime value. If you've been in business for a while and you know that you acquire a customer and sure, your gross profit might be $60 but, they come back and buy from you two, three, four, five more times over the course of the next year or two, that's something to consider here. That's actually going to give you more room to acquire that customer in the first place.

There's all sorts of ways for us to tweak this to get to where you need to be. Looking at the most simple model, if you plan on a customer only buying from you once, the idea here is that you want to stay within these range of target return ad spend ratios and that'll give you the room to scale up your campaigns. Use the spreadsheets, at least get a gut check so you know that as you're scanning through your ads and you're looking at performance early on when you're testing, once something hits that three to four range, you should look at it as having an opportunity to scale up.