1. How long should I run a campaign / ad set without success before I determine it a failure and move on?

3. Consider amount of time - are you in Learning Phase, have you run for a week?

Hey guys. This is Josh and I wanted to walk you through some guidelines around what to keep, when to pause things, when to stop spending money on things. I know when you're starting out, it can be a little bit challenging to understand how much time you should give an ad or an ad set before you shut it down and try something new. If you've been trying any AB tests, different ad creatives, or may trying to test different audiences, this video should give you just a few rules of thumb to better evaluate where things are at and what to trim and what to keep going with.

The first thing we need to introduce here is something called the learning phase. Up until maybe like late 2017, the learning phase was something that we knew was happening behind the scenes for Facebook, but then Facebook actually brought it out into their user interface and their ad manager.

You can see it here under the delivery column when you just have launched a new ad set. You'll see this little label called learning. What it's trying to do is Facebook as an algorithm is learning who they should be showing your ads to. Who's the audience within the audience that you're targeting that should really be seeing your ad? Because based on whatever objective you set for your campaign, Facebook is going to do its best to deliver on what you want.

Be Careful with Changes

When you've reached a point where there's enough stability and there's not these giant peaks and troughs when it comes to the performance of that CPA, you know now that you've left that learning phase and you've entered a level of stability. Respect the learning phase. By respecting the learning phase, you want to make sure that you're not changing too many things like budget. If you do sharp increases of budget during this time, it'll throw that algorithm off and give it new variables to work with and then extend the learning phase. Sometimes the best thing you can do is sit on your hands and just give Facebook enough time to start identifying who to show your ads to.

The second thing that you need to take away here is you really have to understand your context for conversions. Everybody's objectives within their campaigns are different. Some people are just going for a top of funnel lead generation play. Others of you are using Shopify or you're selling some sort of eCommerce product and you're going for the actual sale. You need to understand the context of what you're going after here for conversion and set your expectations appropriately.

What I mean by is this, if you know that your average conversion for, let's say, a webinar registration is $15 or even $20 bucks, once you spend 20 bucks if you don't have a conversion, you can't just shut this thing down. A rule of thumb that we'll often go by is make sure that you give at least two to four x, whatever your target conversion cost is, in terms of total budget spent before you start wildly shutting things down. Because the way things work on Facebook is that it takes a little bit longer in the beginning to dial in those first conversions and then there's kind of economies of scale where the more you run your ad, the better Facebook is able to optimize and those costs will go down. But if you say, "My target is 25 dollars," and you've only spent $25, $30, even $40 bucks, well, now you probably haven't given it enough budget to actually perform.

We've added a few benchmarks here that we've seen. Obviously there's going to be outliers, but for an ebook or a white paper download, we've seen anywhere between one and five dollars once things kick in and get optimized. Webinar registrations, depending on your niche, it can be five to 15 dollars. It could be a lot more if you're really, really focused. Then if you're looking for an actual booked appointment like a scheduled phone call, expect anything between 25 and 75 dollars a piece and much, much higher if you're in a very specialized niche with a very high price point.

Then when it comes to actually monitoring the performance of your ads and your ad sets, you need to understand that Facebook is going to automatically be showing your ads based on how they see them performing. So there is a part of the algorithm that will be balancing more budget to the ads that they see performing at a higher level. That said, if you wanted to compare ad sets, so if you want to compare the audiences that you're targeting, here's a few KPIs, or key performance indicators, you should look at.

Essentially what we want to do in these early stages before you have a lot of conversions coming in is optimize for that attention and engagement. Let's just hit this example down here, but let me describe what these three metrics are in case you're not familiar with the terms. CTR is just click through rate, so the rate of people seeing your ad and actually clicking on it and going to whatever the URL is that you specified. CPC is cost per click, so this is just how much a click will cost. Then delivery isn't like a metric per se, but what it is is it's showing, maybe if you've allocated 50 or 100 dollars to spend in a day, if you're not able to spend that full 50 or 100 dollars and you know that maybe your audience is too small and there's not going to be a really good runway of success here. If you're manual bidding, it could just mean that low delivery or not spending your whole budget means you're not bidding enough.

Ad Not Being Served

But oftentimes what we're doing in the beginning stages is using automatic bidding, so if Facebook isn't able to spend your entire budget for that campaign on a daily basis, you know that your audience is probably too small and not getting the delivery or there's just something gravely wrong about your ad, it has too much text in the image, it's getting a lot of negative feedback. For some reason it's being suppressed. That's delivery.

Let's take an example of maybe two different audiences that you're trying to test. Ad Set A has great click through rate. It wins in that category. Great cost per click, but really poor delivery. On the other hand, this audience over here doesn't have as good of a click through rate, has pretty good CPC. It's on par, maybe it's tied with Ad Set A, and it has enough delivery. It's spending your full budget every day. We're going to go ahead and go to Ad Set B unless there's something glaring that we can fix with Ad Set A. By going to Ad Set B, I mean we'll probably give it a little bit more budget, a little bit more attention. We'll start refining our creatives under that audience first. 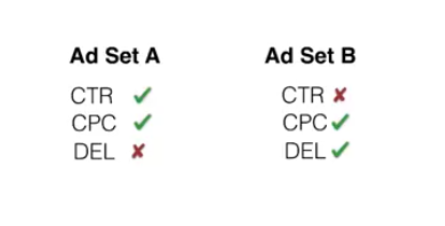 Early on, the key takeaway here is in the absence of conversions that you can compare, maybe one audience to another, try to look for those early signs of engagement. The reason behind this is that when you have great click through rates, when you have great engagement, and eventually after you've had 500 impressions, you'll get a relevance score. When you have really positive signs on all those fronts, it's going to set you up for success down the line because Facebook rewards you with lower costs per impressions and lower costs per click. The more sticky, the more relevant your ad is, the more efficient you'll be at scale when you're trying to reach a lot of people and your conversion cost will go down.

It's important to get some of these things down right. There's a few hacks or tactics that you can follow to try to boost click through rates and lower your costs, but just from a simple analysis standpoint when you're comparing two things side by side, try to look for some of those early engagement metrics that are at the top of your ad follow. It's starting out with attention and engagement.

Okay. So that wraps this module up. What we want to do is make sure that you basically don't do things too fast. Let things run long enough that you're not killing them too early and not giving them a chance to actually blossom. But when there's blatant things wrong in particular with getting click through rates or getting engagement, you want to identify those things really early and keep refining, keep iterating on your creative, or testing new audiences to get to an appropriate amount of click through so that you have enough volume to work with and to actually see it if there's going to be enough conversions for that campaign for it to be profitable for you in the long term.

How to Scale Your Facebook Ads Using Automatic Bidding →