Learn the difference between automatic bidding and manual bidding in Facebook's Ads Manager.

All right. In this video, we're going to dive through the basics and the foundation of bidding on Facebook. I know probably one of the most important questions you have is how can I take $1,000 a day, five, 10, $20,000 a day and spend it profitably, but to get there, and we're going to get there in the following two videos on what to do with your budgets, we'll really need to unpack the basics and the foundations of bidding on Facebook, how you're actually spending your money on Facebook in the first place. If this is a somewhat of a review for you, give it a chance because there actually might be some new info here for you. If you've been intimidated by this all along, the idea of manual and automatic bids, this is going to clear a lot of things up for you, demystify something that's tripped up a lot of advertisers in the past.

All right, so, at the basic level, Facebook has automatic and manual bids. Now, depending on when you're watching this and depending on your ad account, Facebook has started to roll out new terms for these, and they've actually rolled out some different labels for … They've rebranded their bidding options, I think, because people have been so scared off by manual bidding. The automatic bid is now being called lowest cost, and manual bid is being referred to as target cost. That's what automatic bid used to be, lowest cost, and manual bid is now called target cost.

Also, for automatic bids, they've included an option called the bid cap. You can enable this check box called the bid cap. That's actually the old max manual bid. Okay, so, if that's what you were used to before, great. If that meant nothing to you, just understand that these can be two of the same things depending on when you're watching this.

All right, so let's unpack what's happening with an automatic bid. I want to remind you that again, when you come into Facebook to advertise, you're entering into an auction. It's just like an auction where if you're trying to buy beautiful art and people are raising their paddles to bid on the different items, that's essentially what's happening here but in a way larger scale and with very rapid kind of machine generated auction or bids rather.

Okay, so an automatic bid is Facebook's default. It's intended for kind of the majority of advertisers that might be small business owners, or they're going to be running things at smaller budgets and just kind of want to get things out the door and start running right away. What it's trying to achieve is to, A, spend the budget that you've allocated for that day, so whatever your daily budget is, but B, is trying to be more efficient and profitable for you. It's really focused on the efficiency of the bid, trying to get you the lowest cost that they possibly can.

If we look at this chart here, we're looking at basically CPA or your cost per result on this axis, and you're looking at a time period on this axis here. The green dots represent, in an automatic bidding scenario, where Facebook has been able to go out and get conversions for you. 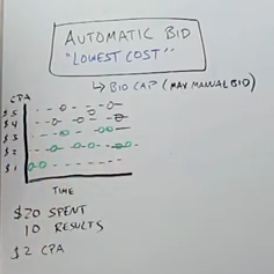 Let's say we've given $20 to spend. They got a couple at a dollar. Awesome. They got a handful here at $2 and a few for $3. There were some opportunities up here, some people who they could have gotten to convert to your ad but didn't even go there because they said, "Okay, we got a $20 budget here. Let's spend this as efficiently as possible and deliver these results." When the dust settles, we spent $20, we got 10 results. It's just nice, solid $2 per action, $2 CPA. Great.

Now, if I wanted to enable this bid cap, which is essentially drawing a ceiling and saying to Facebook, "I don't want to pay more than, and let's just say, I don't want to pay more than 2.50 for my conversions." Facebook will respect that, and they'll basically set a ceiling here. The deal is when the dust settles, now, we don't have anything above this line, so we've set that hard line at $2.50 to not go over this max bid, so now, they're not getting any of these guys up here, and they're not getting these three conversions here. 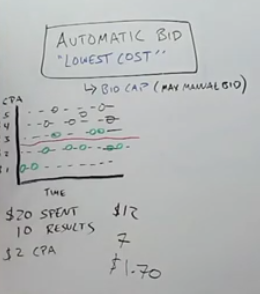 The thing to take away from automatic bids is that they're probably one of the more efficient ways to get lower cost CPAs, but we're talking about smaller budget, so they're actually really well suited, I think, for traction types of campaigns. When you're starting out and you're really testing audiences and testing creative, it's okay to use automatic bidding for that, but now, to kind of draw a contrast with manual bids or what they're calling target cost now, in the target cost scenario, what you're doing is you're giving Facebook a target cost to shoot for, an average.

Your former average cost or manual bid is where you're saying, "Facebook, listen, hey, I'd love to get as cheap a conversion as possible from you, but let's really shoot for a $10 CPA on average over the life of this campaign or over the course of a week or so." Facebook goes out and they find one for eight bucks, one for $4, one for $10 in the money, one for 12, another one for 12, and another one down here for two. When the dust settles, they've averaged out to a $10 CPA. 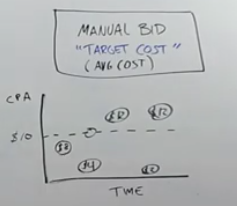 Now, the difference here is that because you've given Facebook more flexibility and more of a range to work with, they're able to get more volume of conversions as opposed to the automatic bid where they're more interested in kind of spending your daily amount and trying to be as profitable as possible with that allocation. By giving them more room to breathe and saying, "Hey, it's really a range here," again, if you know your cost structure, you know your gross profit margin, if you're running an e-commerce brand, you can choose an average cost that's going to allow you to remain profitable, and Facebook will find things that totally crushes that, but it's also going to find things that are above that.

If you look at the whole of your week or of your month or whatever the time period is, it's going to average out to something that, A, gives you profitability so you're not losing money on the whole, but B, it actually gives you a lot more room for scale and a lot more volume. The advantages here of the manual bid side are that when you're trying to scale something, the actual cost per action is much, much less volatile. It's much less likely to be influenced by increases in budget because there's this range or there's this flexibility for Facebook to deliver on these average costs.

Okay, so really, at the end of the day, what I want you to take away from this is that there are two ways to bid in this auction. Everybody's bidding on one of these two options, but these are better suited for different phases in the life of your campaigns. One is better for smaller budgets and kind of just getting traction early on and see what people are responding to. The other is much better suited for actually getting in there and scaling something because when we're going in and giving these average costs, it's going to give us a lot more room to add budget. Facebook will have more people to choose from in the auction to actually fulfill that request of getting more people to come through in the first place.

This is the intro. In the following videos, we're going to go through how to actually mechanically and tactically carry this out in both of the scenarios, automatic and manual.

← How to Setup Custom Columns in Facebook Ad Manager